FLO’s Side Of The Hambini Accusations

A guy who goes by the name “Hambini” posted results of an aerodynamic cycling wheel study. FLO wheels performed poorly in that study. After the study published, FLO and many others had questions about Hambini’s testing protocol—primarily because of the details omitted from his post.

Article Quicklinks hide
Hambini’s Reason For Not Cooperating
Continued False Accusations
The Letter—There’s No Proof
Disrespect Is His Norm
It’s His Opinion, At Best
We Believe In Our Products And So Do Others
Final Thoughts

Hambini answered some questions but avoided others. A couple months later, out of nowhere, Hambini posted the following on his website:

Shortly after writing this blog post, I received a letter from a firm of solicitors representing FLO cycling which was addressed to the HR department of my employer. They complained this page depicted their wheels in a poor light, the test protocol was not openly published and they did not like the statement that they had a limited understanding of the aerodynamics of rotating objects. They wanted their power figures removed from the data along with threats of court action. Furthermore, they requested I was dismissed from my Engineering position for misuse of company resources.

It should be noted that FLO Cycling have a somewhat questionable strategy of paying prominent forum members in a number of popular cycling/tri forums to endorse their products. They usually do this under the premise of free or heavily discounted wheels.

FLO cycling’s behaviour has been disappointing as when the wheels were originally tested and an issue was found, FLO were contacted. This was 2 months prior to the data being uploaded. Once the data had been uploaded, they were first to comment and question every aspect of the testing in surgical detail.

The truth is, no one from FLO Cycling, nor anyone representing FLO Cycling, sent a letter to Hambini or his employer’s HR department.

After the above statement was posted on Hambini’s website, we contacted him to let him know that we did not send the letter. We figured an amicable conversation would resolve the issue. Unfortunately, it did not.

We informed Hambini that we were being falsely represented and requested a copy of the letter, so we could identify who sent it. Hambini has flat out refused to cooperate in any way.

What’s odd, is Hambini continues to insist we sent the letter but refuses to provide any proof the letter is real.

We’re not the only targets either. Michelle Arthurs-Brenna, a female journalist has been harassed by Hambini as well. We’ve shared her blog post about it here. Treatment of others like this is something we cannot support.

Hambini’s Reason For Not Cooperating

Hambini claims he has been “legally advised” to not communicate or cooperate with FLO. We find this “legal advice” rather odd.

We told Hambini the letter wasn’t from FLO. If a fraud is being perpetuated against him, shouldn’t he be interested in sorting it out? Apparently, he’s not. He is sticking to the “legal advice” even as he continues to make false accusations about FLO online.

Hambini’s ongoing false accusations about FLO vary wildly, but include:

All these accusations are untrue. It’s easy to prove the last two claims are false, so I’ll leave those alone. We do think it’s important, however, to clear up why he states FLO pays people to talk about its products.

Tom Anhalt, a regular contributor on the Slowtwitch forum, is a paying customer and friend. After an unfortunate break in at his home, Tom lost the majority of his cycling equipment. Recognizing a friend and loyal customer in need, FLO replaced Tom’s wheel for free to help mitigate his losses. In Hambini’s eyes, that equates to paying people to promote our products.

We disagree. At FLO, we believe in customer service, supporting our community, and helping those who may be less fortunate than many of us in the industry. Our Bike for a Kid program is a prime example of that belief.

The reason people heard about Tom’s free wheel is because he’s active on a lot of forums. Behind the scenes, FLO helps a lot of people in hard situations. Most of the time, you don’t hear about these interactions and that’s ok.

Below, we’ve posted a copy of the letter Hambini alleges we sent via a legal representative. The letter is a legal disaster, littered with typos and formatting errors. 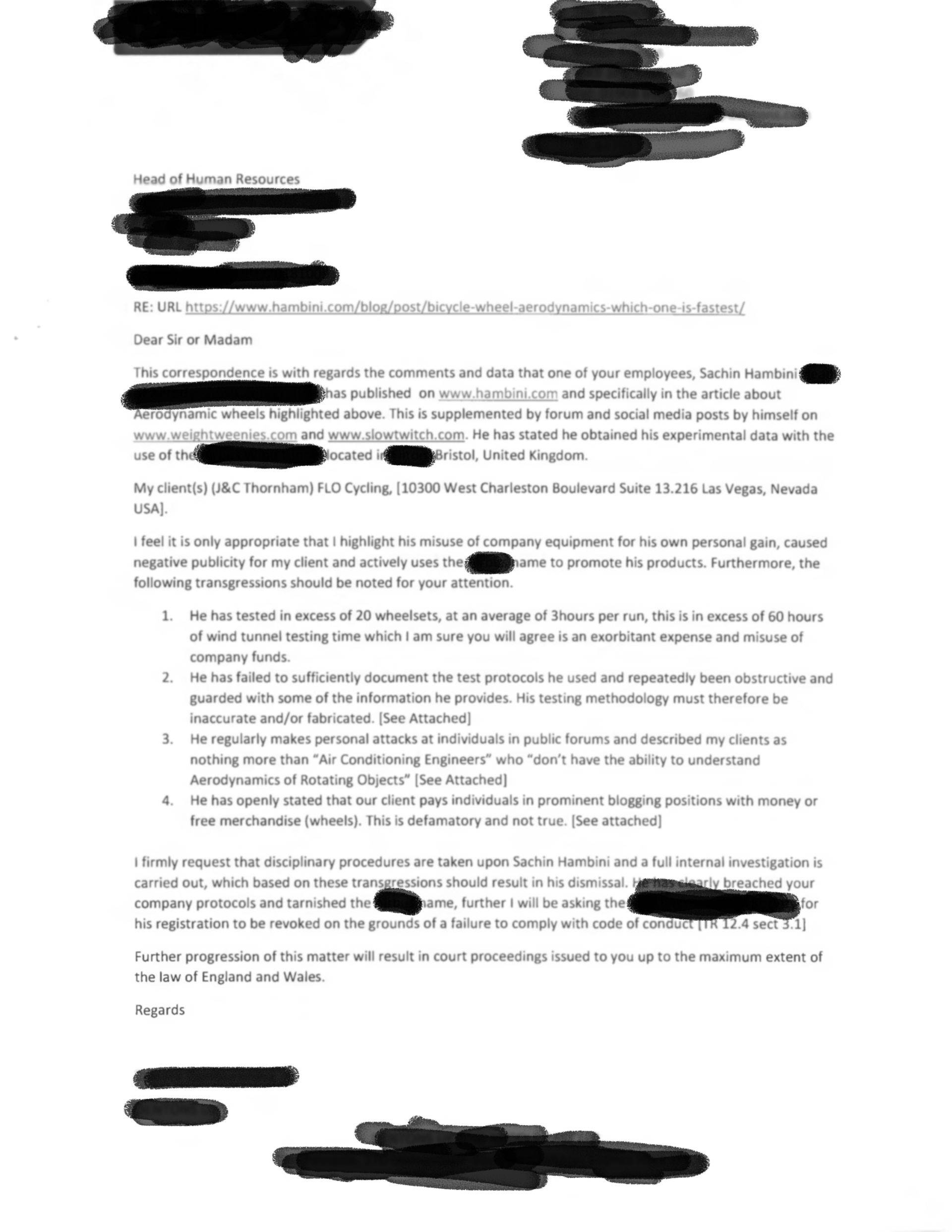 Before highlighting the problems with the letter, we’d like to state the following: We understand lawyers are not immune to typos or giving bad advice and that typos or poor advice do not mean the letter is fake. That said, consider the following points and decide for yourself whether you think the letter came from an attorney—or anyone we asked to represent us.

Note* We’d like to thank some very smart forum members for pointing out some of those errors.

Disrespect Is His Norm

FLO is not the only party at odds with Hambini. There is a long list of people he has rubbed the wrong way.

Hambini was banned on the popular Weight Weenies forum for “insults” and “name calling.” You can see the moderator’s post here.

Unfortunately, acting immaturely and disrespectfully seems to be Hambini’s standard method of operation. Especially when anyone has the audacity to question his testing protocol or results. When we asked questions, Hambini referred to both Jon and me as “stupid” and “HVAC Cowboys.”

In a discussion with Damon Rinard—one of cycling’s most respected engineers—Hambini made the following statement:

If I was him [Rinard] and responsible for that level of Engineering crapness, I would go slash my wrists from the shame.

Hambini’s decision to respond in a rude and belittling manner is common for him, but unnecessary. Instead, why not be professional, or at least polite, and provide proof of your claims? That approach earns respect in our opinion. Others agree.

If you publish data and conclusions from a test, questions are bound to follow. Most of us stand ready and willing to support our assertions. When a questionable protocol has been applied, you can be sure the cycling community will ask for substantiation of results. But Hambini isn’t very good at providing proof of anything—including his test results.

It’s His Opinion, At Best

Test results are only as good as the testing protocol. Any competent engineer knows this. We mentioned that Hambini’s protocol and results were questionable. Well, we aren’t the only ones who feel that way.

Many of our industry’s best engineers disagree with Hambini’s methods. Click their names to read their thoughts:

We Believe In Our Products And So Do Others

Jon and I stand behind our products and our claims. Hambini’s irrational behavior and commentary isn’t going to change that.

Jon and I are professional engineers and we spend considerable time and money designing our products to be the best they can be. We also love what we do and think that helps us make great products.

Since I’m an owner of the company, you may be hesitant to believe me. If that’s the case, listen to episodes 12 and 17 of our podcast. In those episodes, we interview aero wizards Ryan Cooper and Jim Manton and get an unbiased opinion of our wheels.

This entire situation is unfortunate and unsettling. While we can speculate on Hambini’s motives, it feels like being dragged down to his level to lay out our theories on the world wide web. We will instead ask you to think for yourself. If our observations and instincts are correct, you have to question everything Hambini has published, and his test results are no exception. In this, others agree.