Rolling resistance is a hot topic in cycling. The truth is, rolling resistance matters for all cyclists regardless of whether you ride on road, gravel or even a track. It’s important if you race or simply just enjoy riding on the weekends. Why? It effects things like your speed and grip which matter to everyone. There are a lot of myths surrounding rolling resistance, making a complex concept even harder to understand. This article is meant to explain rolling resistance for you, a cyclist, to understand what it is, how it affects your cycling, and how to manage it. Enjoy!

What Is Rolling Resistance?

Resistance is defined as follows:

the impeding, slowing, or stopping effect exerted by one material thing on another.

To help visualize resistance, picture trying to stretch an elastic band with your hands. The elastic band “resists” your hands from moving apart. Resistance makes it more difficult to move in the direction you want to go. For example, when cycling up hill, gravity resists you from moving up or when pedaling into a strong head wind, the wind resists you from going forward.

In cycling, we use pneumatic tires because of their ability to absorb the unevenness of terrain. Their deformation ability, aka the material property of the tire, and the surface the tire is riding on, contributes to hysteresis. Hysteresis is the main cause of rolling resistance in pneumatic tires. What is hysteresis? We’re glad you asked.

Hysteresis in a wheel is explain well by The National Academy of Sciences:

“A characteristic of a deformable material such that the energy of deformation is greater than the energy of recovery. The rubber compound in a tire exhibits hysteresis. As the tire rotates under the weight of the [rider+bike], it experiences repeated cycles of deformation and recovery, and it dissipates the hysteresis energy loss as heat. Hysteresis is the main cause of energy loss associated with rolling resistance and is attributed to the viscoelastic characteristics of the rubber.”

In other words, the rubber compound in pneumatic tires experiences hysteresis and the energy lost is heat and sound. Therefore, the energy required to deform the tire as it rolls onto the pavement is greater than the energy that is recovered as the tire leaves the pavement which contributes to the rolling resistance. The image below shows where the deformation and recovery occur in a tire as it rolls forward on the road. 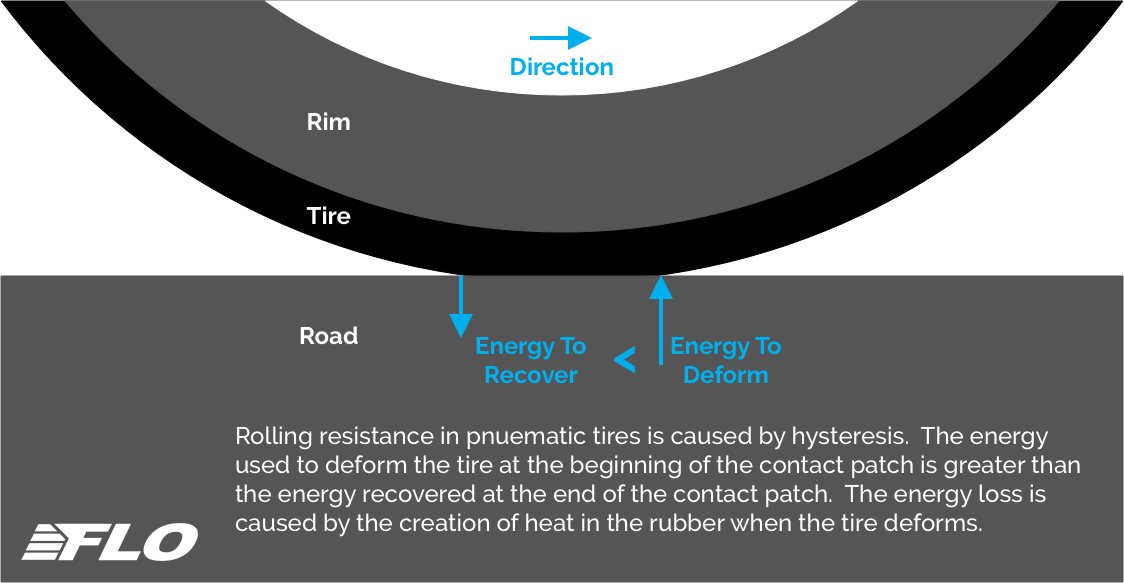 Contact patches are another piece to the understanding of rolling resistance. A contact patch is the area of the tire that touches a surface. We know that when a cycling tire does not have contact with a surface or it is not under a load, it is perfectly round. The picture below shows a tire on a rim without a load.

Rolling resistance is affected by the length of the contact patch. To understand this, think about an object with a small base of support. This object is easier to knock over than an object with a large base of support because of the smaller moment. It also takes less energy (watts) to knock over the object on the smaller base. The same is true for tires with shorter contact patches. When you have a shorter contact patch, your rolling resistance is less, and it takes less energy (watts) to roll your wheel forward. There are several factors that affect the shape of contact patch. The image below shows an example of a small and large base of support. 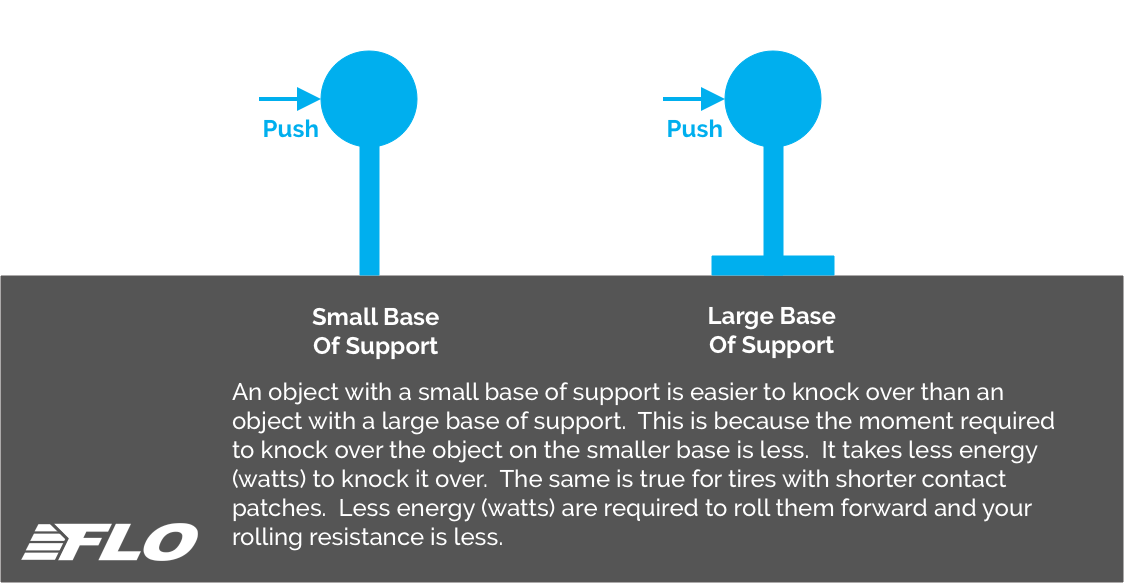 The Shape Of Contact Patches And What Affects Them

A few years back, we wanted to understand the shape of contact patches for different tire and rim widths. To test, we used ink pads to load the bottom surface of tires and then loaded each test tire with a known mass. Then, we studied the contact patches. We determined the following list of items affected the shape: 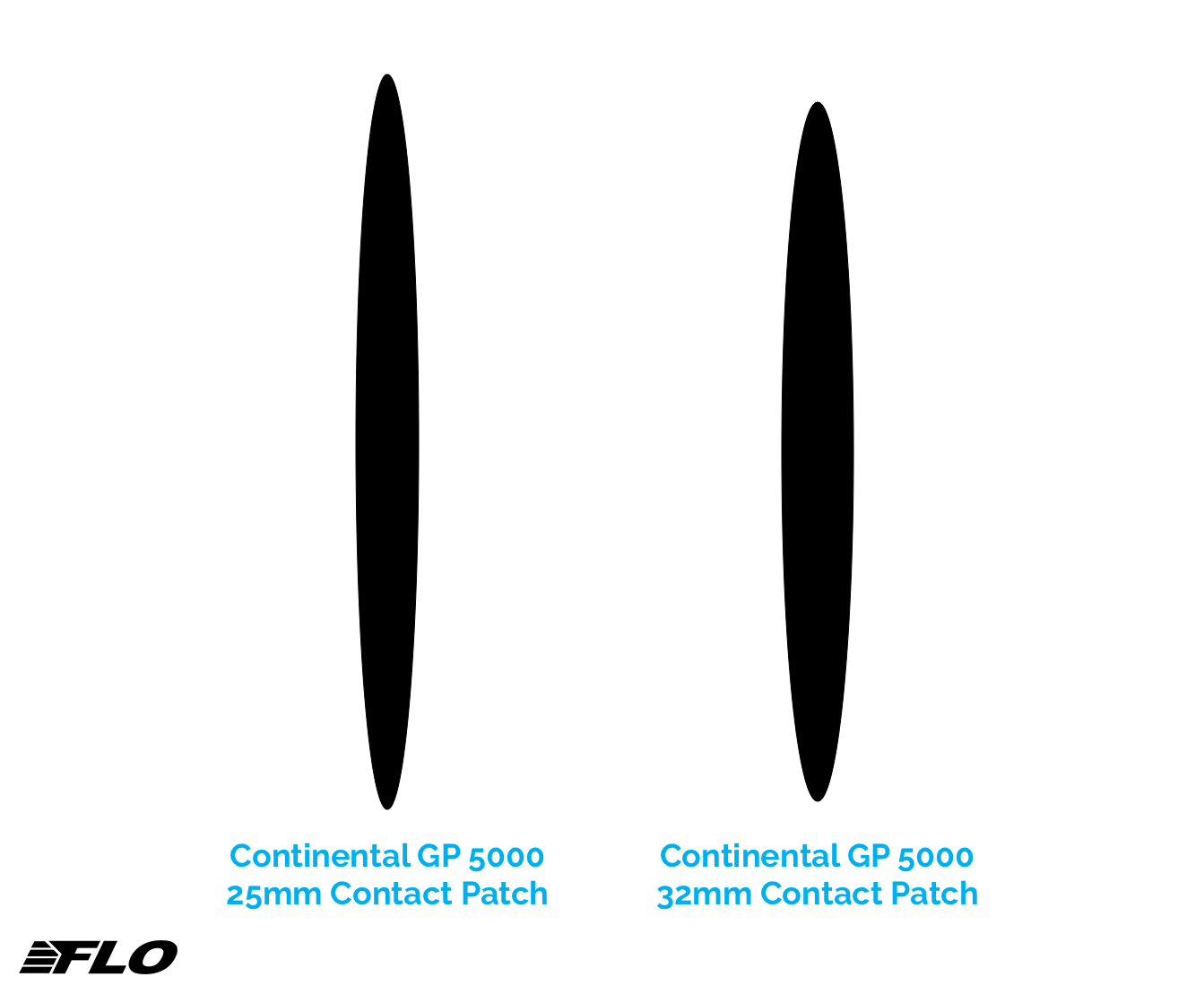 So The Higher The Pressure, The Smaller The Contact Patch The Lower The Rolling Resistance Right? Well, Actually No. Say Hello To Impedance

In theory, the answer is yes. If you are able to create a really small, short contact patch, the moment you have to overcome is negligible because there is so little deformation. For instance, in a lab setting, on very smooth, steel rollers, your Coefficient of rolling resistance (Crr) value continues to decrease as you increase the pressure. Which makes sense given the aforementioned theory.

Another scenario with a smooth surface is indoor track riding. Hour challenge cyclists are known to use very specialized tires and 300 psi, which greatly reduces their rolling resistance.

However, once we leave the lab or the track, surfaces are actually quite bumpy. Even new pavement has a lot of bumps. Our friends at Silca did a really cool study on different pavement conditions and how it affects rolling resistance. We learned that if a tire is over inflated on a rough road surface, the tire ends up bouncing up and down over the bumps. Our goal, as a cyclist, is to transfer the watts put into pedal into forward motion, so, any motion up and down over the bumps is a waste of energy.

Impedance not only wastes energy, but the up and down motion from bouncing reduces your grip on the road. If you’ve ever ridden a gravel bike with too much tire pressure and come around a corner, you lose the front end quickly (and hope you’ve got great bike handling skills.) If you lower your pressure and ride the same corner, going the same speed, you can hold it well. The first image below shows a wheel that has low enough air pressure to avoid impedance. The second image shows a tire with high pressure that is experiencing impedance.

The Gear You Use

So, we know that the lower the rolling resistance, the more watts we, as cyclists, save. That means less energy spent. We also know what helps lower the rolling resistance, like, small contact patches, plus the awareness of the impedance break point. What takes all that information into account? Your gear. Tires are crucial because different tires are made from different materials and the casings are woven in different ways. A good tire, with a low Crr value, can save you eight minutes over a 100 mile century, compared to a tire with a poor Crr value. For example, the Continental GP 5000 has superior rolling resistance (a low Crr value) vs. Continental GatorSkin.

So, what does this mean? Ultimately, rolling resistance is important to a cyclist. When you are managing your rolling resistance, you improve your speed by saving wattage and increasing your grip. In other words, you use less energy to go faster. The best way to do this is with good gear and proper tire pressures. Have fun riding with the understanding of rolling resistance and how it affects you.